Teddy Fitzmaurice, President of Teddy’s T, designs, paints, and sells his t-shirts promoting human rights and disability advocacy. Teddy, a person with Down syndrome, is striving for independence and a life with value and purpose. Your purchase of any item from Teddy helps him be the independent person he tries to be. His microenterprise demonstrates how inclusion drives success. 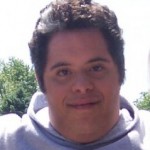 Teddy has transitioned out of 26 years of public school education, is a 2003 high school graduate, and likes to take cooking classes at Schoolcraft College. He began his business in April of 2006. Teddy has taken his tshirts and/ or buttons to Indianapolis, Chicago, Grand Rapids, Springfield, Denver, Orlando, Mackinaw, Columbus, Washington DC, San Juan, New York City, and lots more places we wouldn’t have gone to otherwise.

Teddy’s business is his form of advocacy. People meet Teddy and they realize that all the things they think they know about people with Down syndrome are not true. People also realize that a person with Down syndrome can care very deeply about causes that effect others he cares about. His buttons and  are not just about disability awareness, but also gay rights, reproductive rights, religious diversity, peace, animal rights, and so much more. Teddy has won awards for his advocacy efforts.

The following link connects to Facebook where you can see a video of Teddy accepting an award.
Teddy Accepting Stigma Buster award from Oakland County Mental Health Authority

Teddy  spent the summer of 2010 learning to silkscreen. It’s a process. Some shirts come out as expected – and some come with some surprises – a little extra ink blob here and there.  Please continue to support him while he learns!

Some tshirts are professionally printed in one-color, similar to a coloring book, and than Teddy hand paints in extra color. Teddy tries to paint inside the lines, but just like all of us, once is awhile we all go outside the lines. 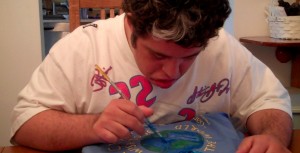 Teddy makes all the small buttons himself using a Badge-a-mint electronic  The buttons are made with a handpress from American Buttons.  He can sit and make about 50 buttons in an hour. Our friend Rich helps us design them, since he does much better with graphic design software than we do. We make new button designs every few weeks.

Teddy lives in his own apartment condo in a level beneath his Mom’s condo. He believes in the dignity of every person, no matter their background, their lifestyles or beliefs, or abilities. He is a proud member of two activist organizations: ADAPT and Not Dead Yet. He is very politically aware.  He makes presentations at conferences and meetings about self-determination. Click Teddy Fitzmaurice – Advocacy in Action – 2013 to see a powerpoint about Teddy.

Would you like Teddy to sell at your event – please send him a note via the contact page.

Teddy and his mom are available to speak at conferences, schools, and places where people support individuals with disabilities becoming self-employed. Teddy’s mom has worked very hard to craft a business Teddy enjoys and is successful doing. It did not happen overnight and many changes are still ahead. Some of the solutions they found to accommodate Teddy’s disabilities will work for most any micro-enterprise. If you are passionate about supporting a person making their mark in the world, and they have the desire to do something more with their life – we can help!

Teddy’s shirts are available in sizes child very small, small, medium and large. Adult small, medium, large, 1XL, 2XL, 3XL, 4XL and 6XL . All shirts are 6.1 oz. 100% Pre-shrunk cotton or 50/50 cotton/poly. Prices online may be different than what you see when we are at conferences. Here you pay extra for shipping – at conferences you may pay extra because of our travel expenses to come to you.

This is the first tshirt Teddy designed himself. It is traced from a photograph by Tom Olin of Justin Dart – we have a newer version  with a larger print and 20th Anniversary of the ADA that was used for the Justin D’Arts Puppet Troop, and was redesigned  to say the 25th ADA Anniversary.

In 2016, Teddy became one of Oakland County Executive’s Elite 40 Under 40 Class.Nearly 450 applications and nominations were reviewed before choosing the top 40 young professionals and thought leaders who live or work in Oakland County. The 40 honorees have achieved excellence in their field & contributed to the quality of life in their communities.

Now Teddy takes art classes at Soul Studio. He enjoys sculpting clay and weaving. He’s had his art of display a few times.