View cart “Deaf Pride” has been added to your cart.

A Hindu Aum symbol in purple and orange surrounded by a red, pink and green lotus flower.

The Hindu mystic symbol aum….”reveals that it is composed of three syllables combined into one, not like a physical mixture but more like a chemical combination. Indeed in Sanskrit the vowel ‘o’ is constitutionally a diphthong compound of a + u; hence OM is representatively written as AUM.

The large lower curve 1 symbolizes the waking state (jagrat), in this state the consciousness is turned outwards through the gates of the senses. The larger size signifies that this is the most common (‘majority’) state of the human consciousness.

The upper curve 2 denotes the state of deep sleep (sushupti) or the unconscious state. This is a state where the sleeper desires nothing nor beholds any dream.

The middle curve 3 (which lies between deep sleep and the waking state) signifies the dream state (swapna). In this state the consciousness of the individual is turned inwards, and the dreaming self beholds an enthralling view of the world behind the lids of the eyes.

These are the three states of an individual’s consciousness, and since Indian mystic thought believes the entire manifested reality to spring from this consciousness, these three curves therefore represent the entire physical phenomenon.

The dot signifies the fourth state of consciousness, known in Sanskrit as turiya. In this state the consciousness looks neither outwards nor inwards, nor the two together. It signifies the coming to rest of all differentiated, relative existence This utterly quiet, peaceful and blissful state is the ultimate aim of all spiritual activity. This Absolute (non-relative) state illuminates the other three states.

Finally, the semi circle symbolizes maya and separates the dot from the other three curves. Thus it is the illusion of maya that prevents us from the realization of this highest state of bliss.”

To read more about this pictograph and the Hindu chant aum, go to http://www.stillnessspeaks.com/ssblog/aum_om_turiya/ .

Be the first to review “Aum” Cancel reply 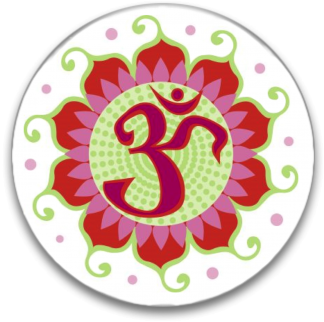