Nain Rouge is a very ugly red creature with horns, bug-eyes, and a long tongue that haunts the city of Detroit.

“In 2010, a community-based movement began a tradition of a costumed community parade in the Midtown/Cass Corridor neighborhood of Detroit. Called the Marche Du Nain Rouge, this event is a revival of an early tradition in the legend of the Nain Rouge. At the conclusion of the parade, an effigy of the imp was destroyed, thus banishing the evil spirit from the city for another year. Each year, parade participants and spectators are encouraged to wear costumes so that when the Nain Rouge next returns, he will not recognize the persons who once again ousted him from the city limits and thus will not be able to seek personal vengeance.”  (https://en.wikipedia.org/wiki/Nain_Rouge)

Be the first to review “Nain Rouge” Cancel reply 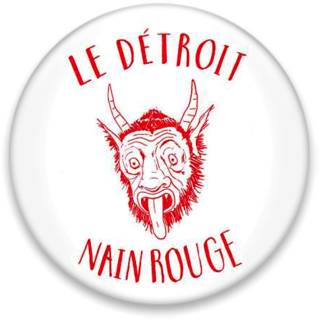